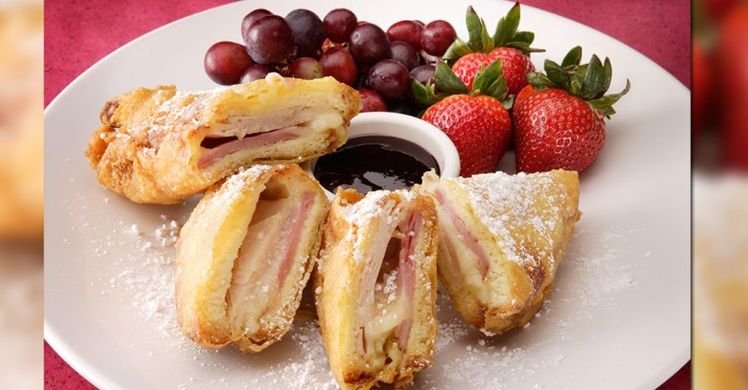 Disney Shares The Recipe For Its Legendary Monte Cristo Sandwich

Disney is full of magical moments. From the cheerful characters to exciting rides, and not to mention the delicious food. There is so much fun to be had at Disney! That said, with the parks temporarily closed, people are still looking for ways to bring a touch of Disney’s magic into their home. Luckily for us, Disney has unveiled some of their coveted recipes so we can at least pretend we’re at Disney!

D23, an official Disney fan club shared the recipe for the legendary Blue Bayou’s Monte Cristo sandwich from Disneyland. According to D23, the Monte Cristo has been on the menu since 1967! The sandwich is so popular that the restaurant serves nearly 200 a day. Fans also used to be able to score a recipe card to make the sandwich at home. And thankfully, D23 has one of those cards and is sharing the recipe with us!

For those that have yet to try one of these delicious sandwiches, it’s essentially a deep-fried grilled cheese that features ham and turkey. D23 shares both the vintage recipe (found on the recipe card) and an updated version that swaps a few ingredients such as white bread for challah bread. So you can choose which version you’d like to try! Or why not try both. The sandwich is made from simple ingredients and is served with a sprinkle of icing sugar, jelly on the side — delicious! Get the full recipe and instructions on D23’s website.

ICYMI: The Monte Cristo sandwich isn’t the only legendary recipe you can try from Disney! Disney has also unveiled the recipe for their Churro Bites, Dole Whip, the Grilled Cheese from Toy Story Land, Cookie Fries, Mickey Mouse-Shaped Beignets, and the iconic Chocolate, Peanut Butter, Banana, French Toast. There are so many ways to enjoy your favorite Disney treats at home!