With the sultry days of summer fast approaching, it’s important to take some extra care when preparing food for those backyard BBQ’s, picnics, and cookouts. Nothing can ruin a great party like a case of foodborne illness.

Each year it’s estimated that foodborne illnesses such as Salmonella and E.coli affect 11 million people in Canada and 48 million in the United States. With that in mind, here are some tips to help keep your family safe and healthy this summer:

Tips for fruits and vegetables:

Share
Pin It
Tweet
Email
Chat
Follow
Print
4th of July Drink Recipes: 10 Red, White and Blue Cocktails!
4th of July is one of America’s favorite holidays for many reasons: Great weather, great food and great company are generally...
4th of July Desserts: 10 Patriotic Ideas!
4th of July is less than a few weeks away and we’re continuing our Forkly countdown to the big day with 9 delicious and easy... 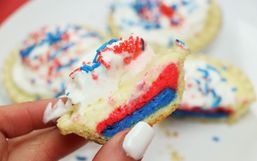 Surprise Red, White & Blue Mini Cheesecakes
Get red, white & blown away with these 4th of July mini cheesecakes!
Items in Your Kitchen You Need To Throw the F Away Already
Last year a little book called “The Life-Changing Magic of Tidying Up” made us realize just how much stuff we’ve been...
This Secret Firecracker Starbucks Drink Is Perfect For The Fourth Of July
Independence Day is just around the corner! Even if your celebrations look a little different this year, there are still so many...
4th of July Appetizers: 60 Great Fourth of July Appetizer Ideas!
Fourth of July is one of the biggest holidays in America. Every year, friends and families gather together to celebrate American...
Keto 4th of July Recipes: Appetizers, Dinner & Dessert Ideas
Staying on track with your diet during any holiday can be extremely difficult.
Top Homemade BBQ Sauce Recipes
BBQ season is every food enthusiast's favorite time of year but most food connoisseurs will agree the key ingredient in any...
Memorial Day BBQ Recipes: Fruits, Vegetables, Meat and Dessert Ideas!
Memorial Day is less than a week away, so get out your grill and start celebrating the kick-off of summer with some of the most...
Father's Day Gift Ideas 2012: 10 Cool Gifts for the Grill!
Choosing a special gift for your dad on Father's Day can be a difficult task for even the keenest of gift-givers.
8 Mouth-Watering Meals for the Grill!
One of the best parts about spring (other than the beautiful weather, of course) is dusting off the grill and cooking up delicious...
Why People Are Going Hog-Wild Over White BBQ Sauce
White barbecue sauce is all the rage on the barbecue scene these days.
Advertisement