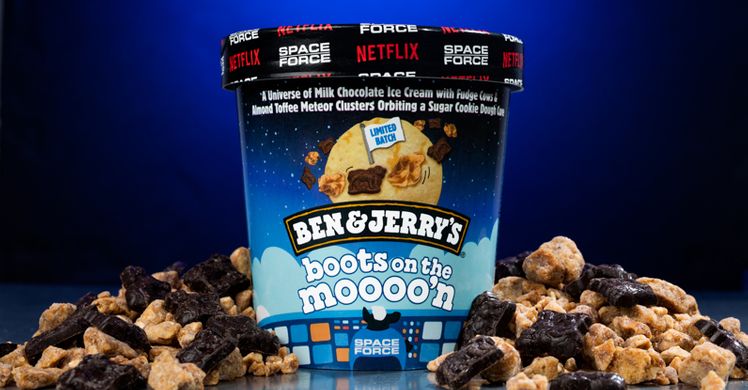 Good news ice cream fans, Ben & Jerry’s is back again with another crave-worthy flavor! The ice cream brand has joined forces with Netflix once again to unveil a space-themed ice cream flavor and we are seriously here for it! The new flavor called, “Boots on the Moooo’n” launches just in time for the release of the newest Netflix comedy series, Space Force, starring Steve Carrell.

According to the website the new flavor features a “universe of milk chocolate ice cream with fudge cows & toffee meteor clusters orbiting a sugar cookie dough core!” The flavor was inspired by the Space Force Goal to get “boots on the moon”. Pints of the new flavor is already hitting retailers with a suggested retail price of $4.99. But be sure to try it now because this is a Limited Batch flavor which means it won’t be here forever! By the way Space Force premiers this Friday, May 29, so why not grab a pint of this ice cream and enjoy it with the show.

Actor and comedian Jimmy O. Yang, who plays Dr. Chan Kaigang the lead scientist on Space Force received a tasting of the new flavor ahead of the launch. According to the press release, Yang said, “I’m excited to join forces with Ben & Jerry’s on this Space Force flavor launch. How cool is it that we have our own ice cream?! Especially because it’s super delicious. Can’t wait for everyone to try it and watch Space Force at the same time,”

ICYMI: This isn’t the first time Ben & Jerry’s teamed up with Netflix. Ben & Jerry’s unveiled a potato chip-flavored ice cream called “Chip Happens!”. The new flavor is inspired by Netflix’s original baking competition series called, Nailed It!. Ben and Jerry’s also released a new “Netflix & Chilll’d” flavor so you can binge-watch your favorite show with a pint of ice cream in hand! We can’t wait to see what they come up with next!

10 Steps To The Perfect Ice Cream Social
Have you ever heard of an ice cream social? It sounds a little old fashioned, and it is!