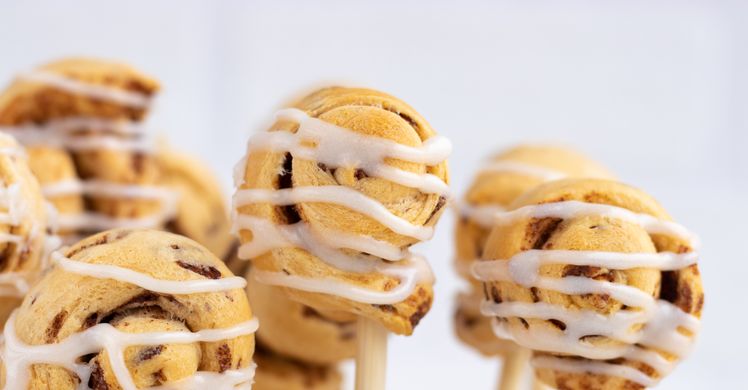 Cinnamon buns are perhaps one of the most beloved baked goods of all time. Serve them warm and gooey and they’re sure to disappear! But while they’re great for brunch or coffee/tea time, they can be quite messy making them less than ideal for events, despite how delicious they are!

To make them event friendly, whether it’s a baby shower or wedding dessert table or favors, we’ve created these cinnamon bun pops that can be eaten handheld mess-free. Plus, they’re inexpensive and easy to make, despite looking like you spent the entire afternoon in the kitchen!

Looking for other fun favors? Check out these Edible Wedding Favors: DIY Ideas Your Guests Will Eat Up or Elegant Recipes For a Breathtaking Bridal Shower! 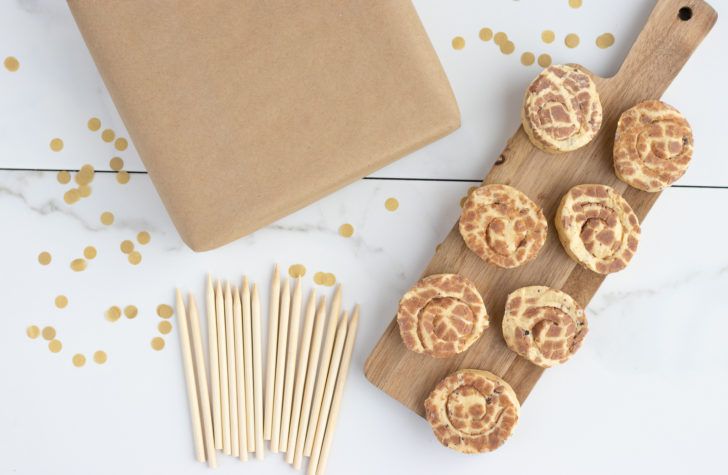 The concept is incredibly simple. Crack open a store-bought package of cinnamon buns, setting aside the icing. Unroll each bun and rip in half so you’ve got two pieces of dough that are equal in length and the same width as the original buns. Using your fingers, press the dough down to flatten to 1/4-1/2 inch thick. If desired, you can use a rolling pin to evenly flatten multiple strips of dough at once. 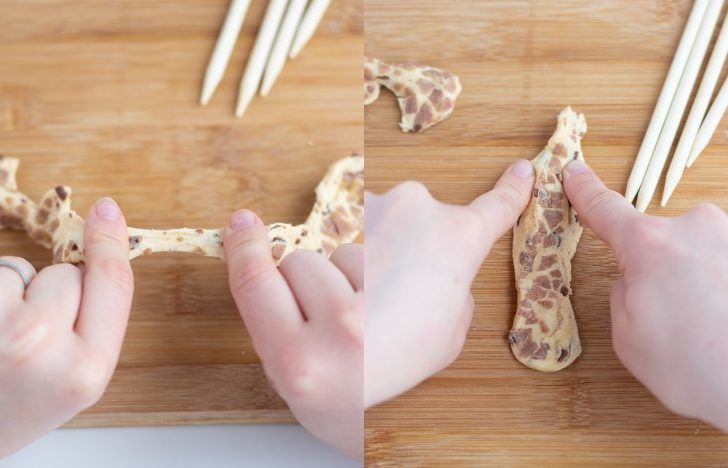 Once the dough is flattened, roll each piece up to look like mini cinnamon buns! Then gently push onto the stick until the stick is about halfway through the bun. Repeat for all of the pieces of dough. You can use any type of candy stick that is oven safe! We used wooden sticks from our local bulk food store, but there are lots of options out there to match your event look and feel. 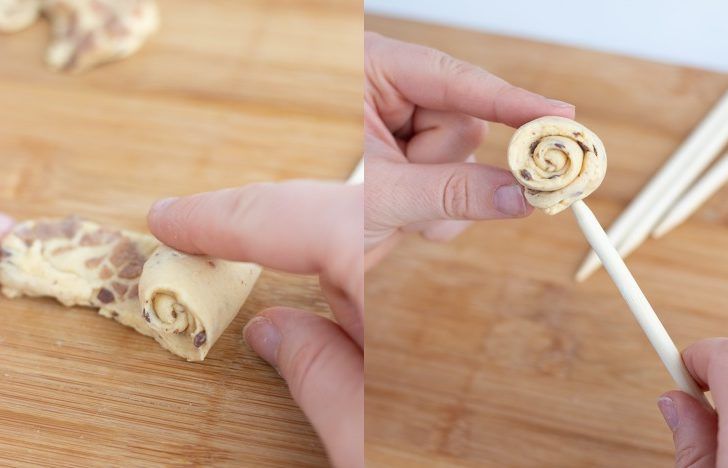 Put on a baking sheet – it’s time to bake them! You’ll want to cook them according to the temperature listed on the packaging and for roughly 12 to 14 minutes. We suggest checking them around 10 minutes to see if they’re browning up nicely, especially since you don’t want them to burn! Once cooked, remove them from the oven and let them cool on the pan on a wire cooling rack. 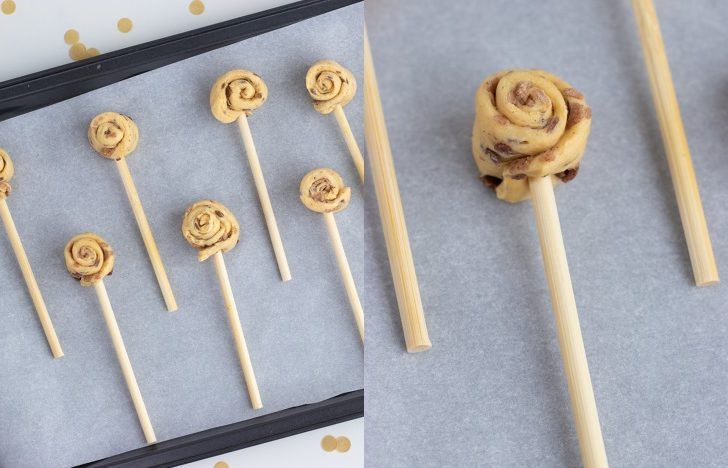 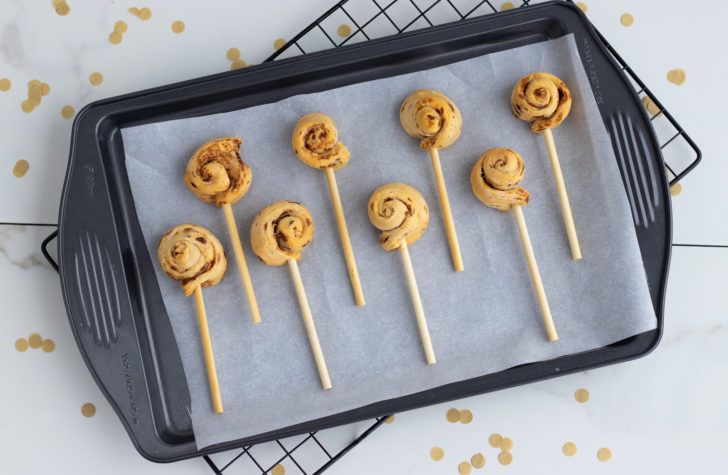 After you’ve let them fully cool, it’s time to ice them using the icing that came with the store-bought package of cinnamon buns. If the icing is still a little bit cold, heat it in the microwave for 10 seconds first. Pour it into a sandwich baggie or a piping bag and cut a small hole in the tip. Drizzle the icing back and forth across each of buns, letting it drip down the sides. Allow the cinnamon bun pops to cool entirely before storing, packaging, or displaying them upright. 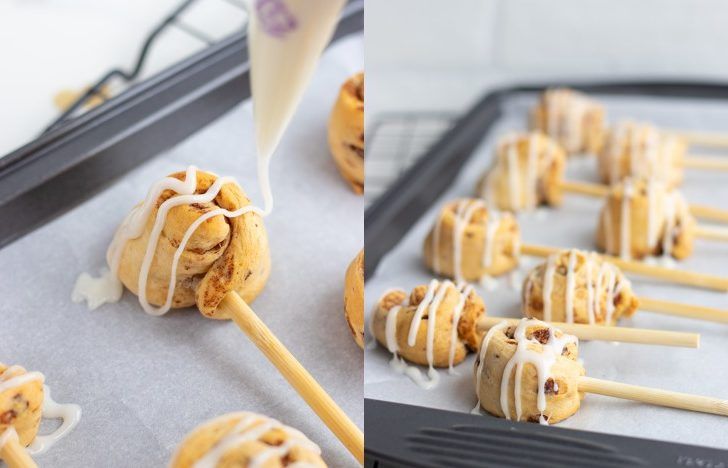 There are a number of cute ways to display these cinnamon bun pops! You can let them dry and wrap them up in a decorative plastic bags with ribbon if they’re favors or being left as part of a place setting decoration. You can also wrap a piece of gardener foam or a styrofoam box in wrapping paper of your choice and stick the pops into that. For a more rustic look, place them in a mason jar to look like a bouquet! 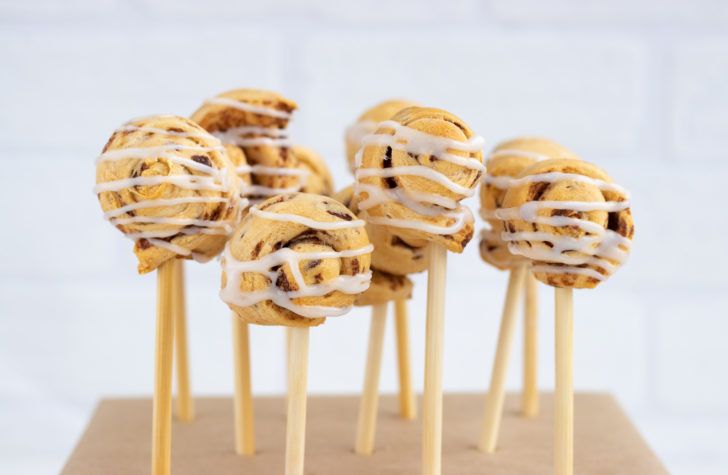 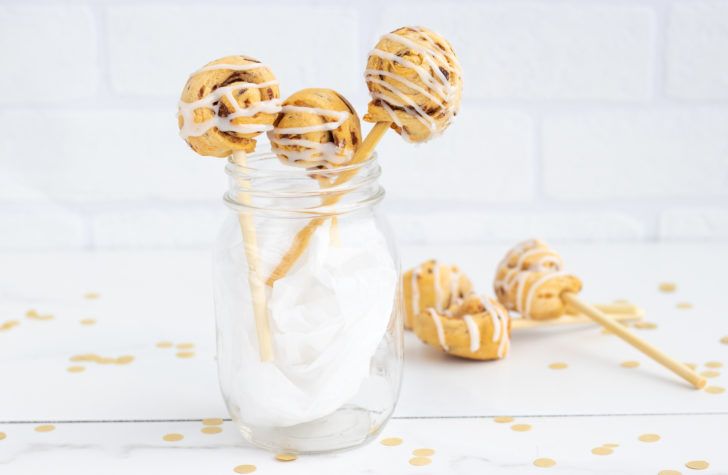 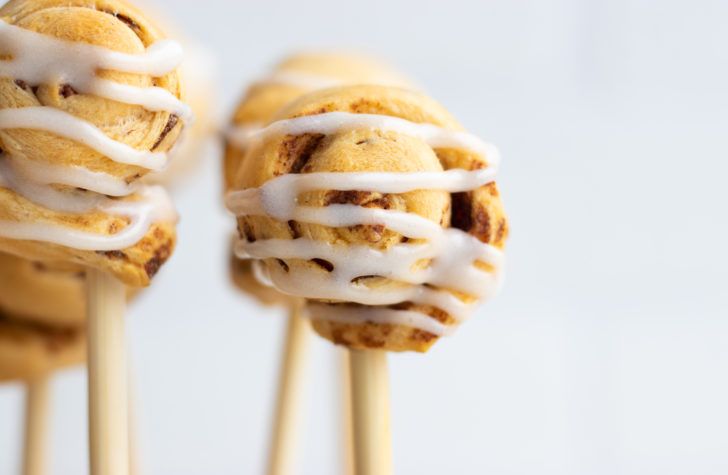 Share
Pin It
Tweet
Email
Chat
Follow
Print
Halloween Party Recipes: Apps, Drinks, Entrées, & Dessert Ideas
Spooky season is here and it's time go all out for this fun holiday.
Cocktail Recipes: Boozy Drinks That Will Impress Your Friends This New Year's Eve
New Year's Eve is an exciting celebration that closes one year and embraces a new one.
Elegant Recipes For A Breath-Taking Bridal Shower
So your best friend, sister or daughter get's engaged and it now comes the time you need to plan her an epic bridal shower.
Ideas & Recipes For a Fairy Garden Party
A fairy garden party is becoming an increasingly popular birthday party theme - especially for those elementary school kids who...
Ideas & Recipes For A Classy Bachelorette
Bachelorette parties are usually a huge highlight of your summer if you have a few friends getting married.
Rawrlicious Ideas And Recipes For A Dinosaur Themed Party
Planning parties can be both fun and extremely stressful. Everyone knows that children have favorite toys or themes so when it...
10 Minion Foods for a Despicably Amazing Party!
June 30, Despicable Me 3 hits theatres and we are sure that there will be some seriously awesome minion parties to follow!
The Best Mermaid Party Food
Looking to have an amazing pool party this summer? Why not make it a fun Mermaid theme?!
10 Darling Summer Baby Shower Recipes
A heck of a lot more than sugar and spice and everything nice goes into catering a summer baby shower!
Keep Spirits Bright With These 10 Party-Friendly Finger Foods
Between Thanksgiving, Christmas & New Years - it's Holiday season, full force.
10 Ideas for an Unforgettable Frozen Themed Party
As much as we’ve tried to “Let it go… let it goooooooo!” the popularity of this 2013 Disney flick just hasn’t seemed to...
10 Fun Food Ideas For Your Lego Party
While party planning can be a pain, it doesn’t have to be as painful as stepping on a Lego, YEEOUCH!
Advertisement
Food
How To Throw An Epic 4th Of July Party Using Only Dollar Store Items
Forkly Favorites
Food
10 Emoji Party Foods To Express & Impress
Food
10 Ideas For A Pokémon Go! Themed Party
Food
Unique and Tasty Pancake Recipes
Food
Christmas Themed Recipes for Parties: 7 Fun Holiday Recipes!
Food
Healthy Recipes for Kids Birthday Parties: 10 Easy Ideas!
Try Something New
Food
How to Throw A Great Party Using Dollar Store Items
Food
Bridal Shower Dessert Ideas & Recipes
For Kids
Jawsome Food Ideas For A Shark Themed Party
Food
Ideas and Tips for an Old School Fondue Party