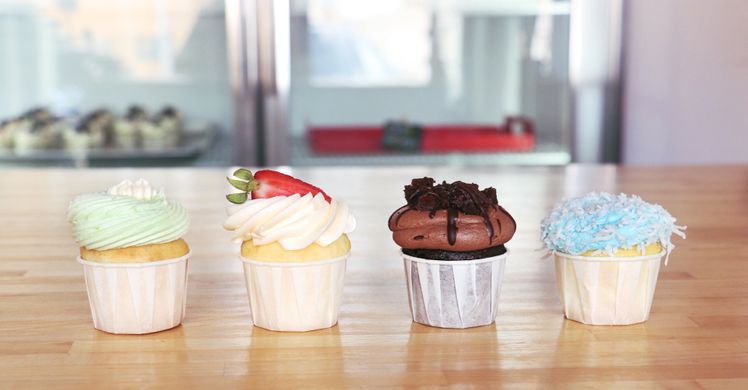 The cupcake world is a little, well…saturated these days. Then there’s a standout cupcake shop that brings whimsy and nostalgia into your cupcake experience, and it knocks it out of the park. That place, is Killer Cupcakes Goremet (no, that’s not a typo).

There is nothing about Killer Cupcakes that is run-of-the-mill. From their rotating flavor packs combining 4 of over 120 flavors weekly. Which means each week, you can get a new selection. It’s impossible to ever get bored. They aren’t your typical “vanilla” and “chocolate” either. Flavors are infused with anything from beer to flowers, tea, liquor and more. Then finally, they are named after nostalgic characters and movies.

Shop owners Nicole & Symon met and fell in love in Vegas and brought all that Los Vegas charm into their little cupcake shop, which actually began as a roadside attraction before growing into a storefront property in downtown Guelph, Ontario, Canada.

They brought all the kitch of Vegas to their cupcake shop along with a little gore, of course. It’s literally splattered all over the walls, and you won’t be able to help but smile at it all.

Killer Cupcakes prides themselves in quality over quantity. With all cupcakes having 100% buttercream (a surprising rarity these days) they make batches and stay open until they sell out. Which as it turns out, is often, but for good reason!

Priding themselves in uniqueness, flavor and personality, it’s no wonder this shop has become a favorite destination for so many.

Oh, and btw… they are more than just cupcakes. With full-sized cakes, cheesecake push pops, and mini bundt cakes and more, there’s no end to the satisfying visits you’ll have at Killer Cupcakes.

Keep an eye out for their rotating cupcake flavors when they are announced weekly on Facebook & Instagram!