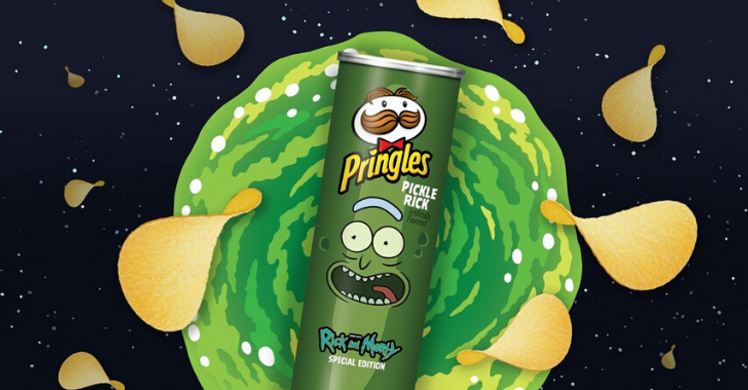 There’s only one way to watch your favorite tv shows and that’s with snacks in hand, amirite? Pringles has released some interesting flavors this year including turkey-flavored Pringles so it’s only fitting that we can expect to see more interesting flavors in the future. After all Pringles is known for its bold flavors and endless stacking possibilities!

With the Super Bowl 2020 on its way, Pringles has teamed up with Adult Swim’s award-winning series Rick and Morty to create a special edition Pickle Rick flavor. The new flavor was created to pay tribute to the viral hit episode “Pickle Rick”. In this episode, mad scientist Rick Sanchez turns himself into a pickle to avoid family therapy.

According to a press release, Gareth Maguire, the Senior Director of marketing for Pringles said: “We want to do something completely new for the brand for the 2020 Big Game and are thrilled to be partnering with Adult Swim and Rick and Morty, a show which continues to grow in popularity year after year and enjoys a cult fan following,” he said. “We hope the new special edition Pickle Rick flavor will be a hit with the show’s fans.”

Jill King, Senior Vice President of marketing and partnerships at Adult Swim even hinted that there could be more to come with their partnership with Pringles. “We’re very thoughtful about who we partner with around Rick and Morty and we couldn’t be more pleased with our new relationship with Pringles,” she said. “Not only are the Rick and Morty show creators making a hilarious spot for the Big Game, we’re extending this partnership in really exciting ways, all year long. Rick and Morty fans are going to be given amazing new opportunities to illustrate their love for this iconic show, thanks to Pringles.”

These special addition Pringles are set to hit the shelves nationwide starting early February. But be sure to keep your eyes peeled for the Super Bowl ad which is set to air during the second quarter of the game on Sunday, February 2. The ad is created by Adult Swim in a partnership with Gret Group and you seriously don’t want to miss it!