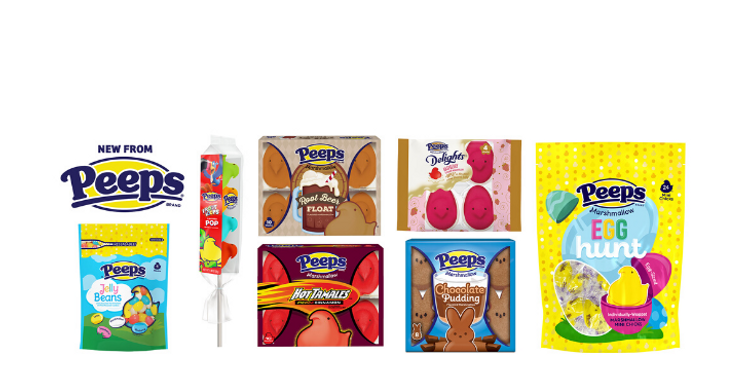 PEEPS has no shortage of exciting treats to choose from and the brand has even expanded beyond its candy offerings. Just in time for Easter, PEEPS has unveiled new offerings that will make the perfect addition to your Easter baskets. Follow along as we roundup the 7 new enticing PEEPS treats you don’t want to miss!

“The PEEPS® Brand has become an icon in American pop culture, with its instantly recognizable colors, shapes and flavors holding a special place in the hearts of many for nearly seven decades. We take pride in seeing that parents who were given PEEPS® in their Easter baskets as kids are now passing those traditions on to their own family,” said Caitlin Servian, Brand Manager for PEEPS®. “We strive to meet the perfect balance of history and innovation by continuing to offer our classic PEEPS® Chicks and Bunnies, while also bringing new and exciting products to our fans.”

The iconic cereal brand, Froot Loops joins forces with PEEPS to bring you PEEPS Froot Loop Flavored Pops. This limited-edition treat is available exclusively at Target and Walmart. In February, PEEPS unveiled new Hot Tamales-flavored PEEPS which features that iconic cinnamon flavor. This spicy candy is available only at the Kroger Family retailers. You can now also try the new PEEPS Delights Raspberry Flavored Marshmallow Chicks Dipped in Crème Flavored Fudge. This sweet treat is exclusively sold at Target. Finally, you will also be able to find new individually wrapped PEEPS Marshmallow Chicks which are perfect for egg hunts and can only be found at Walmart.

Can’t get enough of that iconic PEEPS flavor but want to try something new? Then score yourself a package of the all-new PEEPS Flavored Jelly Beans!

PEEPS has also partnered with several other food and merchandise brands to unveil some intriguing products you don’t want to miss! You can now enhance your morning cup of coffee with a splash of DELIGHT PEEPS Flavored Coffee Creamer! Want to make your morning even more exciting? PEEPS also partnered with Kellogg’s to debut PEEPS Marshmallow Flavored Cereal with Marshmallows.

In case you didn’t know, PEEPS also has a special PEEPS decorating kit and they would make the perfect Easter gift for your kids and you can find it at Walgreens! The kits come with soft marshmallow chicks and edible accessories so you can let your imagination run wild! As we said, PEEPS has no shortage of intriguing innovations and it only makes us wonder, what’s next?

ICYM: Earlier this week PEEPS Partnered with Crocs to debut the most colorful clogs ever!