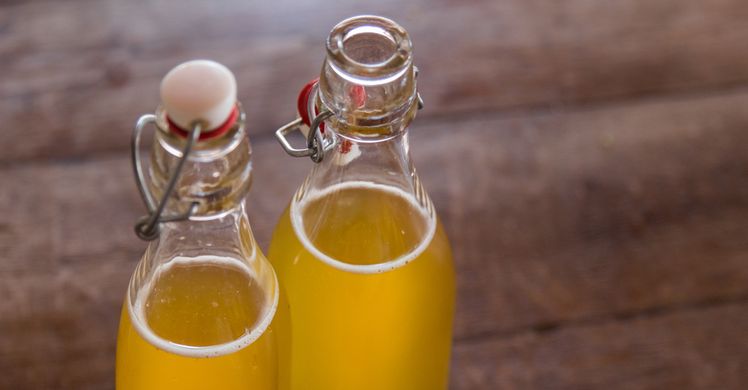 Kombucha: The Healthiest Living Drink Around

Kombucha is a lightly effervescent (ooh bubbles!) fermented green or black tea beverage that’s lightly sweetened, and sometimes accented with additional flavors of fruit and herbs. Kombucha was originally a home brewed beverage which used bacteria and yeast to ferment the tea. In the last 20 years, those homegrown recipes began to be bottled and sold in North America. After a steady climb amidst claims that it could do anything from aiding in digestion to curing cancer, the drink has gained so much popularity that health food stores often have an entire shelf devoted to the many different varieties now available. Some call it magic, some call it hocus-pocus. Since it has a naturally formed carbonation, it’s almost like a healthy soda! From its origins as a home brew in Asia, to the present-day high priced varieties in the grocery and health food stores, it’s no wonder people are still opting to home brew their own batches of kombucha, which ferments for drinking in just 14 days. While Kombucha has been a trend for a couple of years now, it continues to be on an upward climb as the world of fermented foods grows. Believe the hype or not, it’s a delicious beverage with possible benefits, so it’s worth giving a try!