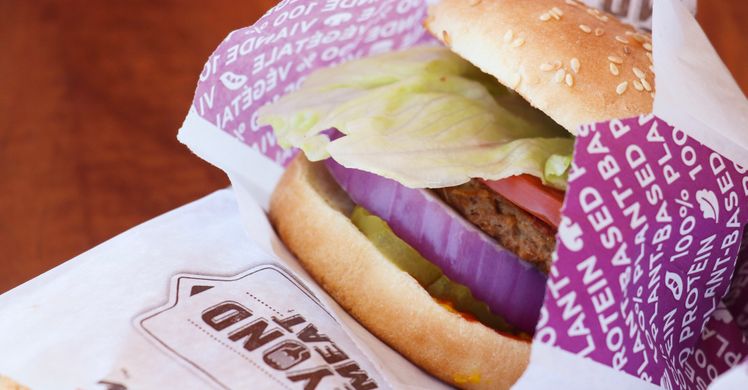 You’ve probably been hearing things about this new vegan burger everyone’s going crazy for, the Beyond Meat burger. Well, that buzz created some major waves in the food industry and a big fast-food contender just showed up to the party.

On July 9, A&W officially released it’s Beyond Meat vegan burger. The plant-based soy-free gluten-free non-GMO burger that “bleeds”, or so it appears.

So we wanted a real review. Not just with vegans, but with meat-lovers too.

We noticed on the menu as well, that you could opt to have any of the burgers on the menu, with a swap-out for the Beyond Meat burger for a minor surcharge. Color us impressed!

Meet our panel of judges, along with their reactions & reviews:

Sarah, Vegan & Gluten-Free: The idea of a plant-based gluten-free anything at a fast food joint (beyond fries and a side salad) is something to get excited about. But did the Beyond Meat A&W Burger meet expectations? Sarah ordered her Beyond Meat burger lettuce wrapped, no mayo, making it gluten-free/vegan and shaving off close to 200 calories.

Notes from Sarah: Loved that it was finally a fast-food gluten-free and vegan option that she could enjoy with her family. Loved that it tasted “normal” and had a really great look and color. She’s also pretty sure she can sneak it to her kids without them noticing a difference.

Would Sarah order it again? YES

Olivia, meat-lover: An Italian girl with a love for good traditional foods, Olivia is not someone who has dabbled much into the vegan dining world. Her opinion on this burger should be a good unbiased one. Would she trade in a traditional beef patty for this one made entirely of plants? Olivia ordered her Beyond Meat burger with all the regular toppings.

Notes from Olivia: Felt it was really good, but it did fall apart easily she found.

Would Olivia try it again? YES

Would Olivia choose it over a beef burger? NO

Rhiannon, Vegan-ish: Considered “vegan-ish” because while Rhiannon loves plant-based foods, she is flexible in her eating habits, especially when family and social events come into play. Someone with a foot in both worlds, we wondered where this burger would compare in her eyes. Rhiannon ordered hers without mayo (personal preference).

Notes from Rhiannon: Rhiannon doesn’t even like traditional fast food burgers and meat because she finds them unappetizing. She was pleasantly surprised by the taste and texture of a quality meat-free patty. As someone who eats both, she found this to be the best option overall, especially because it was soy-free.

Would Rhiannon order it again? YES

Would Rhiannon choose it over a beef burger? YES

Riley, meat-lover: A traditional foodie, Riley eats and loves almost all foods. Plant-based food isn’t part of his regular diet, so his opinion was something we were all curious about. Riley ordered his Beyond Meat burger fully vegan with no mayo.

Notes from Riley: He really liked it, it was tasty and better in color than even a beef burger. He doesn’t normally like vegan food and found it appetizing to look at and eat. He was quick to question the ingredients because he was shocked at the lack of aftertaste and odd-flavors that he’s experienced before with vegan meats.

Would Riley order it again? YES

Would Riley choose it over a beef burger? YES

Clarissa, Vegan: Vegan for just over a year, Clarissa has yet to try the Beyond Meat line at all. For us, first impressions for someone who hasn’t had meat in a long while are everything. What did she think? Did it live up to the hype? Clarissa ordered her Beyond Meat burger without the chubby mayo sauce (which contains eggs and isn’t considered vegan).

Notes from Clarissa: She was excited to have her first Beyond Meat experience as a vegan especially after hearing so much about it. She loved that it was moist and flavorful without any weird aftertaste like so many other vegan patties tend to have.

Would Clarissa order it again? YES

So…would you try it??