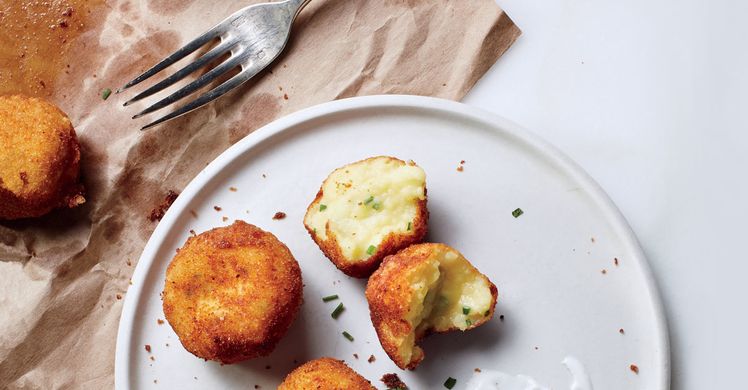 Potato Potatoh: The Very Best of Your Favorite Starch

From humble peasant food to ultimate comfort cuisine, potatoes have proven to be our favorite starch for centuries. Their ability to adapt to different cuisines and diversify themselves to meet so many different preparations and applications means that it’s hard to ever get tired of the humble spud, there’s just so many ways you can eat them! Everyone has their personal opinions on the best way a potato should be prepared, but here are few of the very best, as selected by this Dutch-blooded, potato-loving writer:

Without potatoes there would be no pierogies, which would be the ultimate travesty. It’s widely debated whether you should boil or pan fry your little potato pockets, but in my personal opinion I say boil for softness and then pan fry for a quick golden finish.

There’s no shortage of ways to bake potatoes into a cheesy mess of deliciousness and this hasselback gratin is no exception. With a golden brown crust it makes for one irresistible side.

Potatoes tend to appear in mains and side dishes more than anything but true potato lovers know there’s no wrong course for this favorite starch. These crispy little latkes can be served as an appetizer and topped with sour cream, apple sauce or pickled vegetables.

No summer barbecue is complete without at lease one potato salad (or two if you’re lucky.) For a break from the same old, same old try this spicy kimchi potato salad which adds sriracha and kimchi to the mix to kick things up a notch!

You can’t forget a classic. Twice baked potatoes are the ultimate way to eat a baked potato and with the use of the microwave, you can have these delicious flavor-packed spuds in less time than you think!

I know this is the second gratin to appear on this list but I couldn’t in good conscience leave this one off the list. Julia Child, the Queen of French cuisine knows a good gratin when she see’s it and this is her recipe for the quintessential potato gratin.

Mashed potatoes might be the most popular potato side dish in North America, and that’s ok with me. In this version, potatoes are mashed with milk, butter and hummus which actually makes for extra creamy and tasty mashed potatoes! Who knew?!

Photo by: Gimmie Some Oven

Cacio e pepe literally translates to “cheese and pepper” and that’s just the treatment these little spuds are getting in this dish which takes a classic Roman Italian favorite and gives it a potato spin.

For those who like their potatoes crispy…you’re going to love a rosti (assuming you haven’t discovered this gem of the potato world already.) Grated potatoes are pan fried into the crispiest potato cake that makes a perfect side dish or main meal.

Do you ever find yourself faced with the tough task of deciding between nachos and potato skins? I know I’ve encountered this problem more than once, but this creative spin on traditional potato skins makes sure you never have to choose again.

Tater tots are a very fine way to eat potatoes on their own, but combine them with the likes of peppers, mushrooms, onions and eggs in a frittata-like casserole and top it with cheese and you have the makings of a glorious potato-centric breakfast.

Photo by: Voodoo and Sauce

If you’ve never had gnocchi, you’re missing out on a dreamy way to eat potatoes. These pillowy little potato dumplings are great simply sauteed in some brown butter and topped with fresh herbs, but they’re even better when baked with this creamy blue cheese sauce.

Photo by: Food to Love

The only thing better than mashed potatoes is deep fried balls of crispy coated mashed potatoes. Keep this little idea in mind when you’re staring at a fridge full of Thanksgiving leftovers.

You didn’t think I was going to go through an entire list of potato favorites and not mention fries did you? I was just saving the best for last of course. While I usually leave my fry-eating for restaurants, this homemade version which is cooked twice for a crispy exterior and fluffy interior is pure potato perfection.

Foods That Can Cause Belly Bloating
Bloating happens when the stomach becomes swollen after eating and that feeling is never a fun experience.