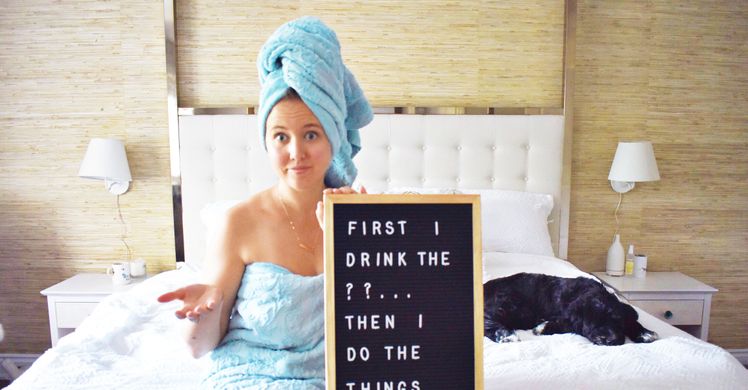 I Tried Giving Up Coffee For One Week: Here’s What Happened

When I first decided that I was up for the challenge of giving up coffee for a week, I had visions of myself by the end of it, resembling Tom Hanks in the movie Castaway… awfully rough and perhaps befriending inanimate objects because I would be so delusional.  I hate that I am a walking cliché, in that the all the mugs and t-shirts reading “don’t talk to me until I’ve had my coffee”, were perhaps made for me. I’m a different person after I’ve had a cup or two – much more pleasant, that’s for sure.  I spend my days chasing around a toddler and a puppy, trust me, I NEED coffee (or so I thought). I started the week desperate to find a coffee alternative; I tried every kind of tea in my pantry as well as kombucha and doubled up on my B12 supplements but by the end of the week, I didn’t even seem to need them.

Here are my biggest takeaways from the week:

Day one started out with all kinds of withdrawal type symptoms–which pretty much cements my suspicions that I have an unhealthy relationship with coffee—I had a headache, was super lethargic, dizzy, I couldn’t focus and I fell asleep on my book in the middle of the afternoon.  Each day I seemed less and less desperate for my caffeine fix, and by the end of the week, I didn’t seem to need anything at all.  I woke up the morning after a friend’s bachelorette party at the end of the week and drank a lemon water and was completely satisfied…I was a changed woman (who drank a coffee immediately upon waking once the week was over). As evidenced by the fact that on day one, I would have done a lot of terrible things for a cup of coffee and got the cold sweats just thinking about it.  Okay, maybe it wasn’t THAT bad… but it wasn’t pretty, I can tell you that much.  As such, there is no video or photo evidence of me on day 1, no one needs to see me like that.

2. I Missed The Routine Of Coffee.

Coffee is such a ritual in our house, either my husband or I wake up every morning and make a vegan bulletproof coffee, which requires multiple appliances, multiple ingredients and we drink it in bed while our little man drinks his bottle.  I started the week by trading this for tea because I didn’t know what to do with myself otherwise but by the end, I was just grabbing a glass of kombucha from the fridge, or making a lemon water and calling it a day.  The coffee routine is something I was happy to get back into on the morning after my week-long trial was over… what can I say, I’m a creature of habit.

3. I Had More Sugar & Carb Cravings

I had way more sugar and carb cravings than I usually would. I may have actually gained weight during this little experiment.  I found myself craving all kind of carbs; pizza, bagels, donuts; you name it, I ate it.

4. I Did Not Sleep Better

I don’t think that I slept any better without drinking coffee but I definitely needed more sleep than usual without my morning pick-me-up that I would usually get from a cup of joe.

5. I Tried Other Solutions

While nothing gave me a “pick-me-up” in the way coffee does, I did try some new things to replace my regular coffees. Here is a breakdown of what I tried:

It was warm, which was a plus for me, I prefer warm drinks in the morning, and it’s good for you, but hot dang, it did nothing for me otherwise—I did not feel any more awake after drinking it that’s for sure, though it probably didn’t help that I tried it on dayone. It also didn’t seem to curb any cravings, as aforementioned, but it did have some sweet mantras attached to the tea bag, which was a nice way to start the day.

Black tea, which I resorted to making by the pot, was warm, which I liked and perhaps perked me up a little bit, but again, it could just be that by the time I had resorted to black tea my body had adjusted slightly to the lack of morning jolt it was used to.  I also thought I might take this opportunity to use the dainty little teacups that sit in the cupboard looking pretty, but collecting dust.  I quickly decided that they were nowhere near big enough for the amount of tea I was going to need to keep myself upright all day long.

The kombucha that I was drinking had minimal caffeine, and I didn’t like drinking it cold first thing in the morning, though I do like the flavor of it.  I think that this is something that I will stick to later in the day and for its probiotic benefits, not for any sort of coffee type substitute.

This one was just a Hail Mary.  I happen to take B12 supplements already as a vegan, and I happen to know that B12 is one of the active ingredients in energy drinks, so I thought what could it hurt to have a bit extra?  I’m not sure this did anything for me, but at least I remembered to take my vitamins.

I tried giving up coffee for a week, and I survived! In the end, giving up coffee for the week was a great experience, and definitely, something that I needed to do.  Ironically, it was a bit of a wake-up call, that I could probably curb my dependence on it a little bit going forward.  Coffee isn’t something that I’m ready to give up entirely like I said, it’s my favorite way to start the day; a warm cup of coffee in bed with my boys.  However, I did remember how much I really do like tea.  I used to drink it quite a bit before I was chasing a little one around and coffee became a necessity to keep me going.  I even started having a chamomile before bed again because I remembered that I had some when I went digging through the cupboard looking for the tea that I thought would have the most caffeine in it (desperate times).  I also started going to bed a bit earlier because well, I was more tired of the most part but I think that this is a good thing; it allowed me to slow down a bit, and get the rest that I probably need anyhow; both habits that I hope to keep up.  I also managed to keep all my friends, didn’t have any sudden angry outbursts like I thought I might, and didn’t befriend any volleyballs; life is good, and I will definitely be watching my coffee intake in the future.